Meet 3 exceptional men: Jack, Mike and Reg, up for trade.

I traded Rodrigus the Frog with Retha for Jack, Mike and Reg. I thought at first it was just going to be for Jack, but Retha decided to give me a bonus and throw in Mike and Reg too! Cool beans! 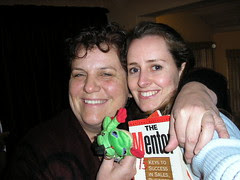 We met at the opening of the Tao Day Coaching and Wellness Centre in Johannesburg- that’s the only time Retha had free in her busy schedule. You see, Retha's an ace change agent! (and coach and trainer too). Amid the trading of Rodrigus, there was also the lighting of candles in the Zen garden to bless the centre, and the drawing of archetype cards to see what roles the guests would play in the centre. I drew “The Prince”, which is a leader in training (?) and Rod drew “The Mediator”- so I guess he’ll be negotiating fairness and strategy in the professional and personal lives of those he meets while he travels the world.

So now that I’ve got acquainted with Jack, Mike and Reg, you’ve got the opportunity to get to know them and learn from their experiences. Let me introduce them in a bit more detail:

So if you trade with me, you’ll get to be mentored by Jack as he shares his secrets of success in sales, business and life. You’ll also get to explore the discoveries about doing business in South Africa that Mike and Reg learnt since 1993, and share in their fears and flaws as they take you into their worlds and minds. And not only will you “meet” them, you’ll get to keep them - on your book shelf!

So would you like to trade with me for Jack, Mike and Reg? If so, send me your offer to onematchstick@gmail.com .