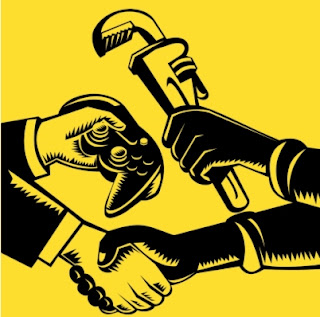 Tamara wrote a great piece for the Gordon Institute of BusinessScience's Magazine, on bartering and how it can – and is – being used in business today.  Check it out here, and especially the bit about Tax!


In my interview with Tamara, she had also asked me what first made me interested in bartering. Well, my earliest memory of bartering was doing an “egg drive” to raise funds for something at primary school.

I would go to my neighbours and ask them for a donation, or an egg.  If they gave me an egg, I would go the next house and ask them to buy the egg or make a donation of another egg.  And so on, often selling the eggs when I had a half dozen.  And then I would start again asking for one egg.

I also explained how I have used what I learnt from onematchstick in my coaching practice.
For attending my training courses, I’ve bartered with clients cash for covering expenses like printing and venue costs, and then bartered for the persons services for the rest of the training costs.

I have also applied what I learnt when I did what I called “three-ways” to my business.  For an explanation of three-ways see here.

How I applied this was there was a stage a few years ago where I need to upgrade my website for Inner Coaching, and I got a quote from my previous website developers.

I started saving up for this, and while doing that I also asked my website guys if they would consider bartering for the site (my first ever website I traded coaching for the founder of the company, for my website, so I knew they would be open to bartering).

They didn’t need any coaching or training at that time, so I asked them what they did need.  They said they wanted a year’s listing on a prominent PR website. 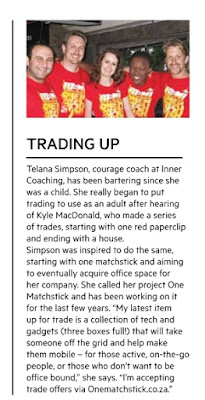 So I contacted the founder of that PR website, and offered them coaching or training for one of their packages.  They didn’t have a need then either for coaching, and so after asking them what they did need, they said it was their company’s birthday celebrations soon, and they wanted prizes to give away to their readers.

At that time, Nick who I trade with, the trade of the books for the Strandveld wine, asked me to teach him more about social media, and he’d barter wine for my lessons.

I convinced him to offer me many cases of Strandveld wine for the lessons and social media consulting, which I then offered to the PR website for their prizes.

They then offered in exchange the year package, which I gave to the website developers, and they in turn gave me a new website for Inner Coaching.  And a 4-way trade was done.  Voila!

Anyway, check out page 62 in the GIBS Magazine, and let me know if you would use  trading and bartering in your business.  Would you?