Introducing Rodrigus and his travel plans

I traded my one ordinary green pen of the ballpoint variety with Megan tonight for her fluffy frog. Here we are. 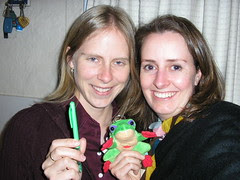 I popped over to Megan's little studio flat on the way home from a meeting tonight, and was introduced to Rodrigus, the fluffy frog, with a zip-able zippered pocket on his back, belt loops, and authentic Canadian maple leaf on his stomach. This is him in the photo.

Rodrigus was just sitting there next to the computer and cannot wait to get out and about. You see, as Rodrigus and I were catching up on the way home, I learnt that he’s got quite a story to tell!

He was born in China, and then shipped to Canada. Megan’s friend bought him from a tourist shop in Canada and, he thinks he went via London on his way to South Africa where he was given to Megan.

Now the thing is Megan had a really bad time getting on with frogs (until recently)… some might even term it a phobia of our amphibian friends that Megan grappled with. So when Rodrigus was dropped off at Megan’s home in Edenvale, Johannesburg, well, let’s just say that there were no fireworks between them. Megan agreed to take care of Rodrigus, feeling that it might help her overcome her dislike of anything that jumped and croaked.

Megan then went travelling overseas for a few years, and during this time Rodrigus spent too long in a dark, cramped box in the storage room of Megan’s Grandmother, at her Retirement home in Edenvale.

Upon Megan’s return from travelling in Europe and Asia (and those travel stories are for another blog, another time Megan tells me) she moved to Sandton with her boxes. Rodrigus was set free again to sit next to Megan while she studied, alongside to her computer.

Megan is a Psychologist finishing off her Masters this year, and she specialises in Community Psychology. She was telling me some of her exciting dreams, like this one of creating a network of people who would like to give back and do something for those in need, but don’t know how to give back. She comes in contact so often with people who just need something small that will make the hugest difference in their lives- something like a phone card to call their child living in another country to see if he is alright, or a pair of shoes, or stationery for their child at school.

So she’s got this idea to put the people’s requests out to a network within the community, so those that want can help those that need it. Great idea, Meg! (If you have any ideas for Megan on how to do this, or would like to be a part, or just cheer Megan on- send me an email and I’ll send it to her!)

Back to Rodrigus… so he’s been sitting next to her computer, getting used to seeing the sunlight again and mixing with people. Just being there helped Megan out a bit with her fear of amphibians, and then lately with the help of the Neuro-Semantic phobia cure pattern, Megan is feeling a lot more tolerant of things that jump and go croak in the night. So as Megan said, it’s time Rodrigus moves on.

And he agrees. Actually he’s got big plans, and this is where you come in.

Rodrigus wants to travel the world! He’s been dreaming of it! He feels like he’s lost so much time sitting by computers and in boxes, that he wants to make up for it and see as much of the world as possible. 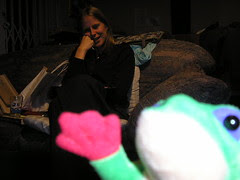 (Here's Rodrigus taking a self portrait with Megan.)

So he’s asked that he finds a home that will allow him the freedom to travel, and he’s agreed that he’ll keep in touch and send me photo’s of all the places he visits, so I can post them here for us to see his adventures.

So this is our plan, and we’re hoping you’ll be able to help out: Rodrigus would like a nice, safe, cosy home to call his base. He’d ideally like to live with someone who travels a lot, but if not, he’d like a place that will allow him to get picked up by travellers. He’d then get to travel and see the world, and still get to come back to his nice, safe, cosy home-base in between travels. So his ideal new owner could be someone who would be ok with people getting in touch with them via me on onematchstick, to come pick him up to take him on their travels and to send the photo’s back to me.

So would you like to help Rodrigus fulfil his dream of travelling all over the world? If so, send me your offer to onematchstick@gmail.com

I’ll be off now to help Rodrigus settle in for the night at his new temporary home next to my computer.