18 bottles of First Sighting up for trade

13 Aug 2006
Bartholomeu Dias, maritime explorer, left his native Portugal in search of a trade route to the east around the tip of Africa. In the year 1488, he first sighted Cape of Good Hope thereby opening a gateway to a new world of trade, which would have a profound influence on Europe and the continent of Africa.

Tabula noua parties Africæ. (Can anyone tell me what this means? It is on the box of Sauvignon Blanc. I’ve googled it but can’t find a translation…)

pays homage to Bartholomeu Dias and his adventure which opened a sea route to the East. First Sighting wines open a new route into the world of wine for their customers.

And now First Sighting is part of the onematchstick adventure too, opening a new route into blogging! 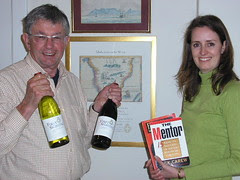 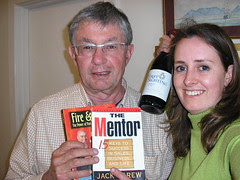 I’d say that Nick is a like minded trader- I found out over lunch with him yesterday when I went to make the trade, that he also trades wine with his dentist for his checkups! So trading with me for Jack, Mike and Reg was quite simple for Nick, I think, and the exciting bit is that Nick can now say he’s been blogged! A first for him!

He owns Agulhas Wines, and in the mid 2000's they made wine from about 80 tons of their own grapes- and the First Sighting label was created. Nick traded 2 cases with me- one case of 6 bottles of the Sauvignon Blanc, and another case of 12 bottles of the Shiraz (an extra 6 bottles than he originally offered- BONUS!). The other cultivar (a big wine word for me) is the Chardonnay. Nick was saying that all these wines are everyday drinking wines, and you can enjoy them anywhere, but- and this is the part I like about them- they really pair well with ADVENTURE!

So who’s feeling adventurous out there? Who’ll make me an offer for the 2 cases of 18 bottles of First Sighting?

6 bottles of First Sighting Sauvignon Blanc 2006.
This is a crisp, fresh wine with asparagus, buchu, fig and wild gooseberry flavours. The grapes selected were grown in the Elim region. The vineyards are planted in poor flint soils in the coolest and southernmost vineyards in Africa. Gale-force winds off the sea at Cape Agulhas result in small yields and grapes with intense flavour. The Sauvignon Blanc is a versatile food wine – You can enjoy it with your favourite seafood or pasta dishes, or simply on its own.

12 bottles of First Sighting Shiraz 2004
This wine is characterised by the flavours of red fruits with vanilla oak and ending on a spicy white pepper aftertaste. Selection of vineyards was based upon the vineyard's visibility from a passing ship at sea. Two vineyards were chosen, one in the Darling region and the other in the Agulhas region. The grapes from Darling give us ripe fruit with soft tannins while the Agulhas grapes provide the distinctive cool climate with white pepper aftertaste. The Shiraz was matured in French oak barrels for 14 months. It is a versatile food wine – you can try it with heavy beef or tomato-based dishes. Simply delicious.