Eric had made an offer a few days ago, but I couldn't see how it would work.

A few months back in March I had put on my creative cap to come up with a new strategy to trade on the party. And it seemed I must have had that cap on backwards or something, because it took 117 days to realllllly kick in and woke me up at 2am with a fantastic idea. I scribbled down a couple of pages of notes- you know how big and wonderful and fantastical ideas can grow at 2am, don't you? Waking up the next day (yes, I did manage to get back to sleep for a few hours), I thought that the idea was maybe a bit too fantastically dreamlike, so I let it be.

But the idea wouldn't let me be.

I decided to then phone up a mentor and he helped me shake the idea around, and actually it's turned out to be quite the 2am idea. I then tweeted Eric and said "I've got a 2am idea- keen to hear?" He said yes.

I sent him an email, leaving out the fantastical dream parts, and I got an even bigger YES back!

Now I'm a big fan of 2am ideas – they're the bomb! Mine helped me make a trade, getting one- actually two- steps closer to my office!


So here's how the Springleap.com T-shirt Trade is going to roll:

I'm making 2 trades in one go- my ninth, then tenth trades. These trades are going to take a few weeks to roll out, but they are full of fun!

I traded the Party of the Century with DJ 'AL your Pal' with Eric Edelstein and Eran Eyal of Springleap.com for 375 funky T-shirts.

This is the first time I am trading with guys who I met through twitter, and who don't live in Johannesburg. They're both based in Cape Town. How cool is that!

I met up with Eric and his lovely Fiancé Jade on Friday as they were up in Jozi for the IFS (that's the International Fashion Sale). Eric and I finalised the numbers, worked out the details for a cool onematchstick T-shirt competition (details coming soon), and then shook hands. 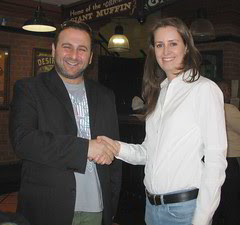 I then zipped across to the IFS to meet Eran, as it was such a great co-incidence that they were both in Jozi in time to finalise this T-shirt trade and I was in the area after meeting with Mongezi about the onematchstick movie (yes- details to follow soon –so much has been happening!). Mongezi joined me to meet Eran and check out some of the Springleap T-shirts, and we had such fun chatting to Eran and customers and fans of Springleap T-shirts and watching the fashion show. 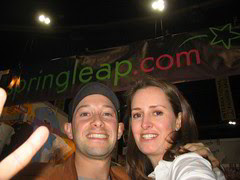 To trade on the 375 T-shirts I'm going to need 375 fabulous people to help me! I've had enough people say they'd love to trade something with me and be part of onematchstick, but they didn't feel that they had anything to trade for the value I was at. Well: here's your chance!

I am trading on the 375 T-shirts with 375 people, by each person trading some of their cash for one of the 375 T-shirts. And Springleap.com has agreed to help facilitate the trade for me- they're such nice guys!

And to make it even more fun, we're going to search for a onematchstick T-shirt design that rocks, and we're doing that through a T-shirt Design competition- which we're busy putting into place.

In September then, Springleap.com is going to help me make the 375 T-shirt trades by facilitating the process with a special code in their system. You'll get to choose either the onematchstick T-shirt design, or any of the other hundreds of awesome designer, limited edition T-shirts. And better yet, you'll get your T-shirt couriered within 3 days to your door! And you can be anywhere in the world to trade with me- anywhere! But this will all happen in September.

So for now, if you'd like to make me an offer to be one of the 375 people I'll be trading one of the 375 T-shirts with, just send me an email and then once I have the code in September, I'll send you all the instructions to trade with me.

Oooo! This is so much fun!

One Response so far.